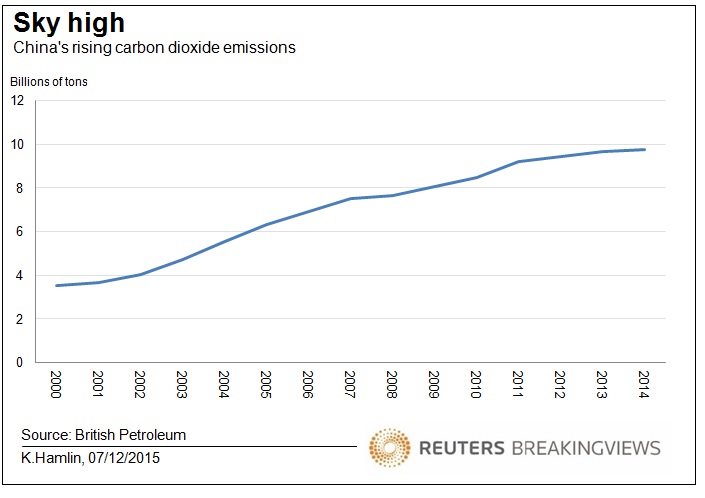 A uniform price on carbon emissions is unlikely to emerge from the United Nations climate change confab in Paris. There’s plenty of support for one, but enough opposition that any mention of it in a final agreement is likely to be vague at best. Here’s a breakdown of why it’s important – and why the current hodge-podge of local and ad hoc measures is far better than nothing.

What is the point of carbon pricing?

It’s generally considered the best way to force companies to cut back emitting gases that trap heat in the atmosphere. The higher the price on these emissions, the more it ought to both deter firms from burning fossil fuels and encourage more investment in clean energy alternatives.

Economies heavily reliant on fossil fuel have a lot to lose if carbon prices force a cut in production. It’s a similar story for energy companies with untapped assets that could become undrillable.

Are there other sources of energy to replace fossil fuels?

Yes. Renewable power such as wind and solar are increasingly competitive thanks in part to technology improvements. Generation costs for new utility-scale solar power has declined by two-thirds since 2010, according to the International Energy Agency (IEA).

Renewables now account for 50 percent of all new power generation and could represent as much as 80 percent of new capacity over the next 15 years, according to Bank of America Merrill Lynch researchers. Fossil fuels still dominate overall: renewables made up just 13 percent of U.S. electricity generation in 2014, according to the Energy Information Administration (EIA). The quicker a CO2 cost is folded into operating and investment decisions, the sooner that will happen.

How is carbon priced?

The two most popular are to impose a tax, or to cap the overall amount allowed and create an emissions trading scheme (ETS) to allow companies to buy or sell any excess capacity they need or have.

Taxes are easier to implement, but are often less appealing to policymakers and elected officials.

How widespread are these two pricing mechanisms?

Plenty of regions and countries have them, including the United States, China and the European Union. Their overall impact, though, is limited: trading schemes cover 8 percent of global emissions annually and taxes half that, according to the World Bank.

Do they work well?

They vary. The cost of emitting one ton of carbon dioxide equivalent ranges from less than $1 in some jurisdictions to $130 in others, with the vast majority of emissions priced under $10, according to the World Bank.

The European Union’s ETS suffers from an oversupply of permits worth 2 billion tons of CO2 equivalent. The price, which was higher than 30 euros in 2006, on Monday closed at 8.41 euros.

That’s nowhere near high enough, and even big emitters agree. Carbon capture and storage may only be justifiable at a price of $60 to $80 per ton, according to Royal Dutch Shell Chief Executive Ben van Beurden.

ETSs have in the past been too rigid to adapt. Emissions allocations are determined by estimates of future need. If these are too high, there’s a surplus, which pushes the price down.

And some polluters receive permits free of charge – perhaps, like tax breaks, to persuade them from moving their operations elsewhere.

China is the biggest emitter of CO2. What is it doing to counter pollution?

The country rolled out seven regional pilot trading schemes in 2013 and 2014, but has not yet had much success reducing emissions. And transparency is poor. Businesses provide emissions information to the authorities, which withhold data from the public.

Are there no success stories?

Of course there are. The northeastern U.S.’s Regional Greenhouse Gas Initiative invested over $1 billion of auction proceeds during its first five years, largely in energy efficiency, bill assistance and clean energy.

China’s pilot scheme may suffer from fuzzy environmental performance, but its bureaucrats boast near-100 percent compliance. It’s set to morph into an ambitious national program that is slated to cover close to 10,000 companies emitting around 4 billion tons starting in 2017, according to Carbon Pulse. And the European Parliament approved a surplus-fighting measure that will begin withdrawing allowances in 2019.

What are companies doing?

More than they usually get credit for. Over 1,000 companies have disclosed that they price CO2 to stakeholders, according to CDP, which lobbies for, collects and aggregates environmental data in the private sector. That means firms are adding a hypothetical surcharge for expected costs that result in emissions, or charge business units a fee for polluting, as Microsoft does. Exxon Mobil, for instance, reported a shadow price of $60 per metric ton by 2030 and $80 per ton in most OECD nations by 2040.

Oil companies aren’t preparing to replace their rigs with wind farms, though. A carbon price high enough to make coal too expensive to burn but low enough to keep natural gas economically viable would probably suit them just fine.

So failure to establish a uniform price in Paris is irrelevant, then?

Absolutely not. An agreement that pushed up the cost globally of emitting CO2 would be the best outcome. It would hasten both a reduction in greenhouse gases and investments in other energy sources.

A patchwork of schemes is less efficient and will hamper attempts to restrict the rise in the Earth’s temperature since before the Industrial Revolution to two degrees Celsius – let alone 1.5 degrees Celsius, a new goal in a Paris draft text on Thursday.

But it’s better than nothing. And the Paris talks have also spurred some progress. A coalition of 19 governments, including Germany and California, and nearly 90 companies – including some oil majors – is looking at ways to harmonize the various schemes currently in place and new ones that arise. That should generate some optimism that a clearer price signal may soon shine through the smog.

Laurent Fabius, the chairman of the 21st Conference of the Parties climate talks in Paris said on Dec. 1 that negotiators were on the cusp of an agreement. Differences on key issues, such as those dividing rich and developing countries, have persisted after nearly two weeks of talks. The conference is scheduled to end on Dec. 11.

The latest draft text of the agreement released on Dec. 10 stated a new goal of limiting the increase in the Earth’s temperature to 1.5 degrees Celsius since before the start of the Industrial Revolution. The cuts to greenhouse gases pledged in Paris so far fall far short of meeting the original target of two degrees Celsius.

Laurent Fabius, the chairman of the 21st Conference of the Parties climate talks in Paris said on Dec. 1 that negotiators were on the cusp of an agreement. Differences on key issues, such as those dividing rich and developing countries, have persisted after nearly two weeks of talks. The conference is scheduled to end on Dec. 11.

The latest draft text of the agreement released on Dec. 10 stated a new goal of limiting the increase in the Earth’s temperature to 1.5 degrees Celsius since before the start of the Industrial Revolution. The cuts to greenhouse gases pledged in Paris so far fall far short of meeting the original target of two degrees Celsius.