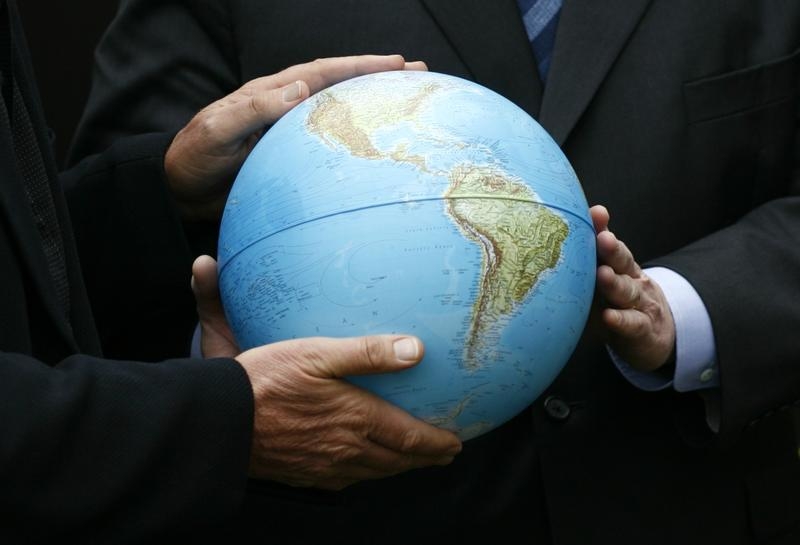 Companies routinely rebrand themselves with the help of expensive public relations advisers and advertising agencies. That’s how, for instance, a booze purveyor transformed itself into Diageo, or a maker of cheese and crackers became Mondelez International. But can entire nations, particularly those with tarnished public images, do the same? This week’s announcement that investment bank Lazard would team up with global advertising conglomerate WPP and one of its affiliates to create “nation branding programs” got some creative juices flowing among Breakingviews columnists on the matter. Herewith are a few fanciful attempts at the rebranding of nations and one actual example (which readers will need to decipher for themselves):

The tiny Pacific nation of Nauru is projected to disappear beneath the waves by 2100. True, this will sink the Nauru detention center where Australia houses illegal immigrants, which is the country’s largest source of income. But water tourism is the new growth industry. It provides a more sustainable basis for the economy than past booms based on exporting bird guano, offshore banking and passport issuance, as well as sovereign wealth investments in such treasures as the short-lived London show “Leonardo: The Musical.”

The country once called Cuba is poised to become a top leisure and business hub. The island’s 3,500 miles of coastline are ripe for resorts, casinos, gourmet dining and nightclubs that will once again turn the nation into a playground for the world’s elite. But Cubaplaya’s economy will be about more than just tourism, cigars and sugar. A flexible regulatory environment will entice high net-worth individuals. Why, even the Cayman Islands will be blushing. Raul Castro, Cubaplaya’s chief executive, understands the benefits of partnering with business. He looks forward to meeting with the investors who will help Cubaplaya become the world’s most exciting new destination for fun and money.

It’s heaven on earth for lovers of the beautiful game. A place where the sun always shines, the stadiums are always air-conditioned, and there is a never a word of criticism to be heard. From the petrodollars that rebuilt Paris Saint-Germain.

The Bolivarian Republic of Venezuela has a number of advantages that make it an attractive destination for investment. First, it has abundant natural resources of oil, gas, electricity, gold, bauxite, iron and other non-metallic minerals. It is a very dynamic and modern market with high purchasing power, in addition to a solvent and secure economic framework due to the payment ability of its government. It is a country open to other markets in the hemisphere, and for that reason also has preferential access to them. A legal framework favourable to investment supports all these features.

With its rugged mountains, elaborately staged cultural events, and quaint farmsteads, the former North Korea is a dream destination for travelers who crave a more authentic holiday experience. A highly re-educated labor force and well-motivated bureaucracy mean Jxhe is also a great place for business. A riff on the trademark “Juche” system of self-reliance pioneered by Great Leader Kim Il Sung, our new national brand concept’s edgy spelling appeals to trend-setting millennials. Taking a page from private security contractor Blackwater Worldwide, which renamed itself Xe after its guards gunned down unarmed civilians in Iraq, it has the added advantage of being unpronounceable. That means fewer pesky headlines about human rights abuses – and more inbound investment.

Switzerland has always been the go-to destination for timely clocks, expensive chocolate and corrupt football executives. But it’s also a great place to end your life. For the first time, traditional Swiss private banking is joining forces with the euthanasia solutions market to offer Switz End. It’s simple: first, we’ll invest your clients’ cash in tax-efficient offshore shells fully invested in the fast-growing eastern Ukrainian office market; then we’ll offer you a range of largely pain-free solutions to escape their implacable anger when it all goes a bit Sepp Blatter. See you in Zurich!

Having comprehensively alienated all its neighbours, England is rebranding itself Perfidia. The nation will leave the European Union (soon to be known more honestly as ‘Germany’) and see Wales and Ireland join Scotland and Cornwall in a loose Confederation of Euro-Loving Celtic Tigers. Though many English will assume Perfidia is a pseudo-Shakespearean reference to their many perfections, foreigners will understand the association with duplicitous dereliction. Perfidul, Perfida, and Perfide will be among its European sub-brands.

The country formerly known as Somalia used to be a trading entrepôt for Mycenaean Greece and Ancient Egypt. In recent years it has been recognised chiefly for topping “failed state” rankings and the acts of piracy off its coast. But with a new name comes a new identity. Summer lie-in is not just about violence and abundant natural resources. There’s an almost untouched coast line that will bring back the ancient glory, with a modern twist: tourism.

The biggest bank in the nation formerly known as France has already knuckled under to U.S. criminal law. Why not go all the way? Come for the crêpes, stay for the subpoenas.

As one of the world’s largest and most demanding locations for the Western adventurer, Tough MudderLand, formerly known as Iraq, has re-positioned itself in a unique niche in the market for global tourism. Tough MudderLand leverages more than a decade of productive development aid from the United States and others. It provides the ideal holiday spot for clients looking for the ultimate thrill, with abductions, beheadings, roadside bombs and suicide attacks providing ample opportunity for pushing physical and mental strengths to the very limit – and beyond. American drone strikes are winning hearts and minds in Tough Mudder Land, of residents and visitors alike. Surviving customers will be flown to the aircraft carrier USS Abraham Lincoln, where they will be awarded a personal “Mission accomplished” certificate.