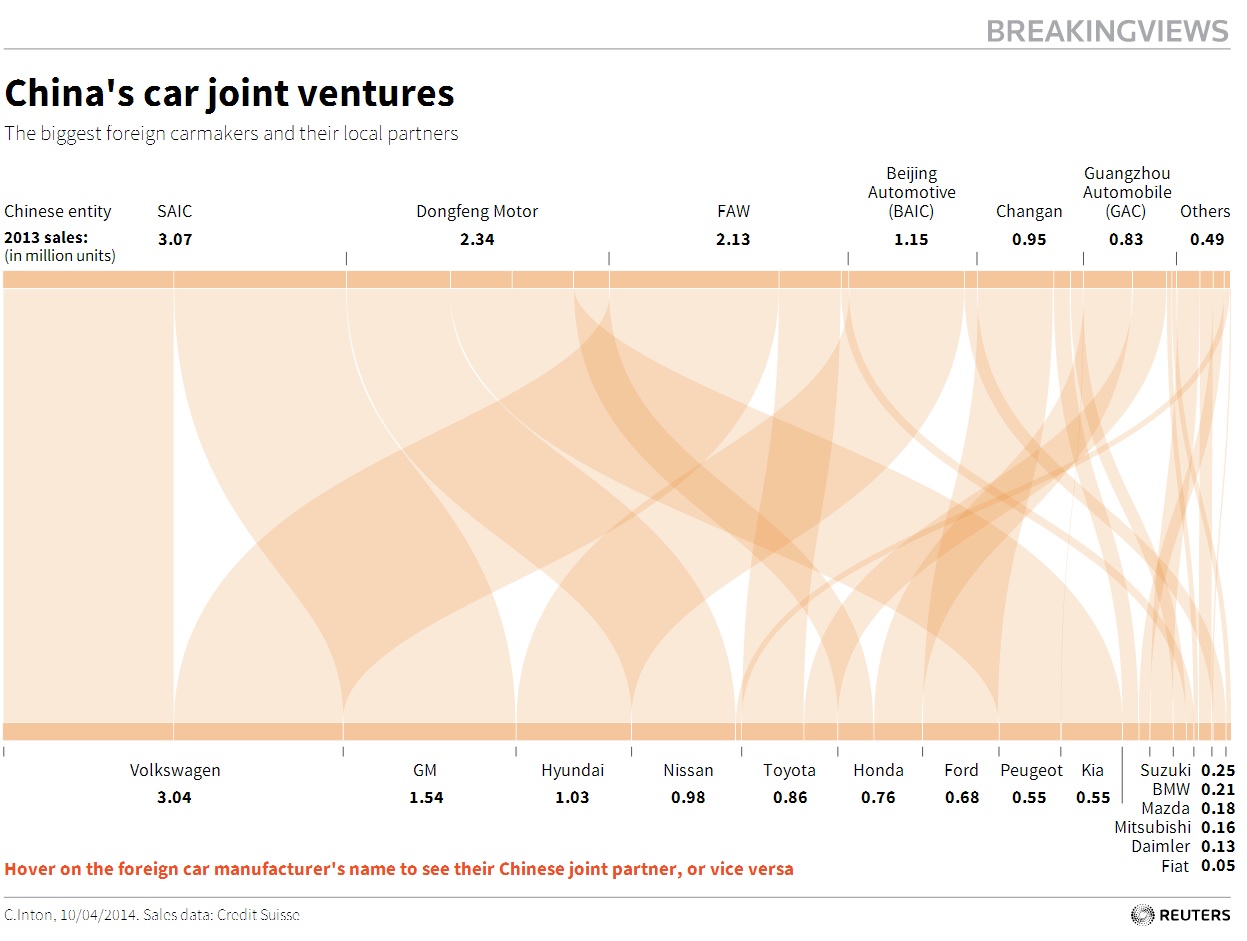 Chinese drivers are booming in number, and foreign auto companies have cruised away with most of the sales. But access to what is now the world’s largest auto market has come with a big financial concession: joint ventures with local partners. Those alliances haven’t fulfilled Beijing’s goal of developing competitive Chinese brands. That divided interest could lead to future break-ups.

When Beijing allowed foreign carmakers to set up shop in China in early 1980s, it wanted to make sure they didn’t kill off the nascent domestic industry. Foreign companies were required to enter into joint ventures with local manufacturers and to share technology with them. Each foreign carmaker is allowed to partner with up to two local groups in joint ventures.

Since then, China has surpassed the United States to become the world’s biggest car market. Sales of domestically-made passenger cars reached 16 million last year, according to Credit Suisse. Over two thirds of these were foreign models manufactured by Chinese joint ventures. Some of the top Chinese automotive companies are almost entirely dependent on selling overseas brands. For Shanghai’s SAIC, 89 percent of the passenger cars it sold last year were from joint ventures with General Motors and Volkswagen.

The status quo looks unstable. Beijing would like Chinese brands to increase their market share. Meanwhile, foreign carmakers are keen to take a firmer grip on a market that accounted for 85 percent of the growth in global sales last year. Waiting it out won’t help. Though Chinese brands are growing, their sales are expanding no faster than those of foreign models.

This makes an external push by Chinese regulators likely. Options range from allowing foreign companies to go it alone, to kicking them out of the country.

The most market-friendly scenario would be for Beijing to end the joint venture requirement. That would allow foreign companies to buy out their Chinese joint venture partners. Without the steady stream of earnings they receive from the partnerships, many state-owned car makers would face financial distress. The likely result would be much-needed consolidation among Chinese auto groups, which could then focus on producing cheaper models.

Such a move would also level the playing field for privately owned automakers like Great Wall Motor, BYD, and Chery Automobile, which don’t depend much on joint ventures for income. These companies collectively sold some 1.7 million cars last year according to Credit Suisse, roughly the same as Toyota and Honda’s combined vehicle sales in the People’s Republic.

Even if the Chinese authorities don’t ease the rules, foreign companies aren’t completely stuck. One option is to become more entwined with local partners. That’s the path chosen by Daimler, which last year paid 625 million euros ($869 million) for a 12 percent stake in its Chinese partner Beijing Automotive Group (BAIC). The German company got two seats on BAIC’s board, while the Chinese group increased its stake in their jointly-owned passenger car manufacturer to 51 percent. The reshuffle should boost BAIC’s valuation ahead of its planned IPO. Though Daimler was the first foreign manufacturer to be allowed to buy a stake in a state-controlled Chinese auto company, others could follow suit.

The other extreme would be for Beijing to kick foreign companies out of the country. In that scenario, non-Chinese manufacturers would be forced to sell out of their joint ventures, and foreign car sales in China would be restricted to imports, which are subject to high tariffs. Local companies could then imitate foreign brands, though they would still lack research and development expertise.

A more plausible outcome is that Chinese officials will find more subtle ways to help domestic brands. For example, they could impose extra taxes on higher-priced cars, which are mostly foreign models. They could insist that government officials and executives at state-owned enterprises trade their favoured Audi saloons for Chinese alternatives. And they could make it harder for foreign companies to open new factories in China.

It’s possible that nothing changes for a while. But China’s desire for a bigger domestic car industry is increasingly at odds with consumers’ continued preference for foreign brands. That tension is only likely to increase as the country’s car market expands. Like objects in the mirror, a break-up of China’s car joint ventures may be closer than it appears.

China sold some 2.17 million vehicles in March, the Chinese Association of Automobile Manufacturers said on April 11, an increase of 6.6 percent from a year earlier.

GM was the top-selling manufacturer for the three months ending March 2014, selling 919,114 vehicles. The group overtook Volkswagen, which sold 880,700 vehicles in mainland China and Hong Kong.

China sold some 22 million vehicles in 2013, according to the Chinese Association of Automobile Manufacturers. Of those, some 1.2 million were imported.

Chinese-made passenger car sales totaled 16 million in 2013 according to Credit Suisse. Of those, 11 million were foreign brands manufactured through local joint ventures.

On Nov. 19, Daimler and Beijing Automotive Group (BAIC) signed an agreement for the German company to take a 12 percent equity stake in BAIC and two seats on the board. Daimler said it would pay 625 million euros ($869 million) for the stake in return for new shares.