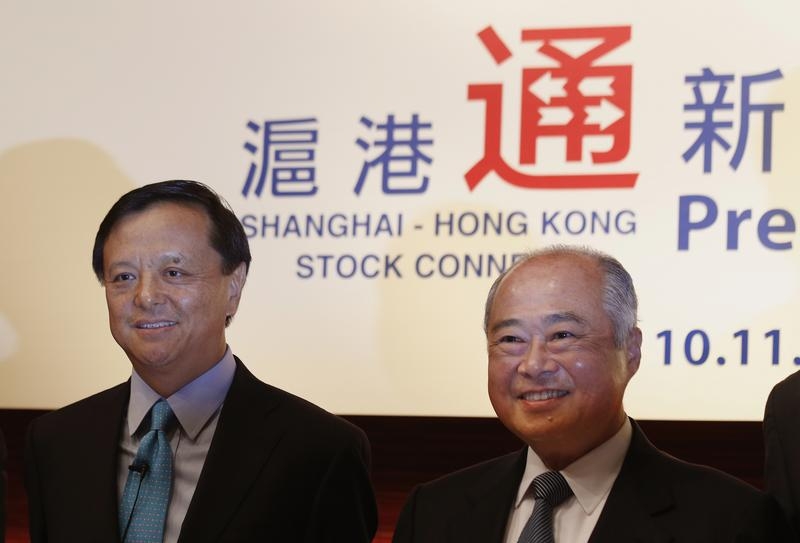 Hong Kong and Shanghai are about to link their stock markets. While it has taken years of debate and several false starts, the hook-up could have big implications for investors on both sides of the border. How big depends on China’s willingness to relax its strict limits on capital moving in and out.

Why did it take so long?

China and Hong Kong have been talking about cross-border share trading for almost a decade. But previous efforts have foundered on the reluctance of the People’s Republic to relax its grip on international capital flows. As a result, foreign investment in Chinese stocks has only been open to a handful of large institutions.

The Hong Kong and Shanghai stock exchanges have found a clever way around the problem: investors in each city will be able to buy shares listed on the other market. But when they sell, the cash comes back to their side of the border. That stops foreign money from flowing into other parts of the Chinese economy – and prevents mainland investors from getting their cash out of the country.

What’s up for grabs?

The idea is straightforward. From Nov. 17, investors in Hong Kong will be able to buy shares in 568 Shanghai-listed companies while buyers from the mainland will have access to 266 Hong Kong-listed stocks. Initially, trading will be restricted. For Hong Kong investors buying in Shanghai – so-called ‘Northbound’ trading – ownership will be capped at 300 billion yuan ($49 billion). The limit for ‘Southbound’ investment from China into Hong Kong is 250 billion yuan. The two exchanges have also imposed restrictions on daily activity. Even so, the volumes could be significant. If the Northbound quota is fully used up, investment by foreign institutions in mainland shares will rise by about 50 percent.

Will investors buy it?

A chorus of banks and brokers on both sides of the border are doing their best to drum up interest. Retail investors seem keen. For mainland investors, the scheme is a rare opportunity to diversify outside China. Hong Kong punters, meanwhile, will gain access to 500-odd companies not already listed in the former British colony. However, broader concerns about China’s slowing economy may restrict their zeal: despite a recent rally, Shanghai stocks are no higher than they were three years ago.

Big fund managers are more cautious. Daily trading quotas mean they cannot be sure orders for Shanghai stocks will be executed. Mainland rules that prevent investors from buying and selling the same share on the same day will also deter short-term investors.

Tax is another concern. Unlike Hong Kong, China imposes a levy on profits from share trading. China’s Finance Ministry waited until the end of the last trading day before the launch of the scheme to announce that Hong Kong investors would temporarily be exempted from taxes. Dealing with opaque regulators is part of doing business in China, but it’s a contrast with Hong Kong’s more transparent approach.

Once launched, it will be hard for China to reverse course. If the link takes off, officials expect it to expand, initially by raising or removing the quotas, and then by including stocks listed in Shenzhen, China’s second stock exchange. Eventually, the model could be applied to other asset classes like bonds.

Meanwhile, the link should speed up China’s integration with financial markets. For example, it will strengthen the case for including mainland shares in emerging market stock indices. That, in turn, will boost demand for Chinese shares from funds which track those benchmarks.

Haven’t we been here before?

Possibly. The new scheme brings back memories of the Shanghai Free Trade Zone, which created much excitement at its launch a year ago, but has failed to take off because of heavy controls and uncertain policies. However, it will be easier to judge whether the stock market scheme has been successful. One area of focus is the difference in the share prices of companies which are listed in both Hong Kong and Shanghai. In recent weeks, the gap has narrowed sharply. If the link works well, it should disappear almost entirely.

However, closing the obvious price gaps is the easy bit.  In the longer term, the test will be whether investors on both sides of the border continue to buy shares, regardless of the inevitable fluctuations in the market.

This feature has been updated to include the Chinese Finance Ministry’s announcement on Nov. 14.

The Shanghai-Hong Kong Stock Connect scheme is due to launch on Nov. 17.

The scheme will allow Hong Kong-based investors to buy 568 shares listed on the Shanghai Stock Exchange. Mainland investors will be able to buy shares in 266 Hong Kong-listed companies.

Hong Kong-based investors will initially be restricted to buying mainland shares worth no more than 300 billion yuan ($49 billion), while Chinese investors’ purchases in Hong Kong will be subject to a cap of 250 billion yuan.

China’s Finance Ministry announced on Nov. 14 that Hong Kong investors would be temporarily exempted from taxes on profits made from trading shares through the scheme.