Paying through the lows 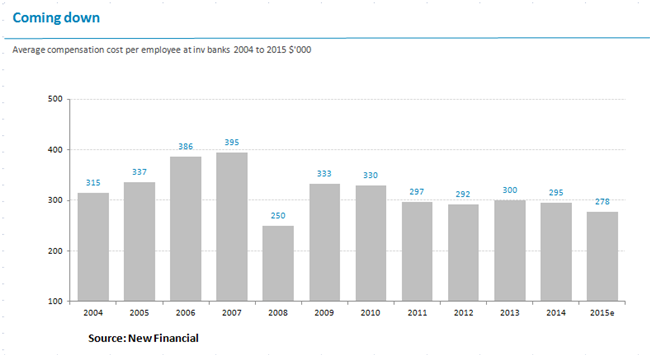 Credit Suisse’s higher fixed costs are one of several unintended consequences of the new rules governing banker pay. The Swiss bank is shrinking the proportion of annual bonuses it defers to 41 percent, from well over half in 2013. There’s a clear rationale: boss Tidjane Thiam is trying to cut expenses, yet he can barely clamp down on pay because of awards made in previous years that keep coming due.

To get an idea of Thiam’s lack of flexibility, consider Credit Suisse’s pay bill in 2014. Bonuses awarded for and paid in that year made up around 15 percent of the group’s total compensation. The bulk of the rest consisted of fixed costs that included salaries, severance payments, pensions – and bonuses deferred from previous years. Put another way, even if Credit Suisse had paid no cash bonuses for its 2014 performance, its costs would have still eaten up 80 percent of its revenue.

Deferrals became commonplace following the 2008 financial crisis because regulators rightly wanted to stop bankers waltzing off with a cash bonus if the trades that enabled it then went bad. But they have been hamstrung by two factors. Jittery markets have meant that the optimistic vision of banks paying deferred bonuses out of fatter profits further down the line hasn’t panned out. And the European Union’s bonus cap prevents banks from paying variable compensation of more than two times salaries, which has pushed up the fixed element of compensation and given institutions even less cost flexibility.

From the perspective of a new bank chief attempting to incentivise his troops, deferrals are a pain for reasons other than income statement management. Employees tend to discount the value of their awards the more that they are delayed, PwC research has shown. The lack of flexibility makes it harder to give star recruits a reason to stay. This isn’t just a Credit Suisse headache: Barclays deferred the entirety of its managing directors’ variable compensation in 2014.

Despite all this, Credit Suisse’s gambit may not signal that deferrals’ days are numbered. Banks’ new ability to cancel unvested awards – using so-called “malus” provisions – has given the industry a bit more control over how much they might ultimately have to hand over. More importantly, the one alternative approach that theoretically could displace deferrals may not fly.

In the UK, banks are now legally obliged to do all they can to exercise “clawback” – reclaiming bonuses already paid in the case of employee misconduct, error or risk-management failings. In theory, allowing banks to force employees to pay back their bonuses if their actions later prove to have damaged their employer seems reasonable. If it were to work smoothly, the need for deferrals wouldn’t be so great.

In practice, lawyers think clawbacks will be at best costly and at worst unworkable. Unlike malus, where the banks retain control of the unpaid awards, individuals facing clawback will often have already spent the money. It could cost banks almost as much to pursue them through the courts as they stand to gain. In European countries with tough labour laws, they could be unenforceable and encourage regulatory arbitrage.

The good news is that banker pay is still falling. There are encouraging signs bosses increasingly understand that pay should be linked to performance – Thiam has asked the board to substantially reduce his bonus for 2015, while at Deutsche Bank the entire executive board is foregoing variable compensation. And while the EU bonus cap has almost certainly stopped pay falling as fast as it otherwise might, overall compensation has still dropped significantly. If average pay per employee for 2015 falls around 6 percent from 2014 levels – as seems possible on the basis of those banks that have so far reported – then industry per capita compensation will have fallen almost a third since 2007, reckons think thank New Financial.

The average investment banker could still be awarded $278,000 in annual pay for 2015, according to New Financial. But a 2009 research paper by academics Thomas Philippon and Ariell Reshef implies this could change in time. Pay for U.S. bankers was still declining relative to other industries almost 50 years after the Wall Street crash of 1929, the pair found. Given the scale of the disconnect between banker pay and everyone else’s, the industry’s standing might improve if history were to rhyme.

The first graphic in this article has been corrected to amend shaded areas of deferred and unrestricted pay.

Credit Suisse Chief Executive Tidjane Thiam has asked for his 2015 bonus to be substantially reduced, according to a person familiar with the situation.

Thiam said publicly on Feb. 4 the proportion of bonuses paid for 2015 that the Swiss bank was deferring would be lower than in previous years, to give greater flexibility over costs.

The Swiss bank’s bonus pool for 2015 was cut 11 percent from the prior year, with just 41 percent of variable compensation deferred. That compared to deferral rates of 48 percent in 2014 and 56 percent in 2013.

Credit Suisse Chief Executive Tidjane Thiam has asked for his 2015 bonus to be substantially reduced, according to a person familiar with the situation.

Thiam said publicly on Feb. 4 the proportion of bonuses paid for 2015 that the Swiss bank was deferring would be lower than in previous years, to give greater flexibility over costs.

The Swiss bank’s bonus pool for 2015 was cut 11 percent from the prior year, with just 41 percent of variable compensation deferred. That compared to deferral rates of 48 percent in 2014 and 56 percent in 2013.