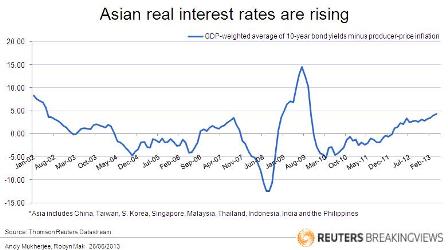 Ben Bernanke has just emptied a big bucket of sand into Asia’s $5.5 trillion-a-year investment wheel. That’s bound to lead to a slowdown in economic activity across the world’s fastest-growing region.

The Federal Reserve chief’s recent signal that the central bank will slow down the pace of money-printing later this year and stop it altogether by mid-2014 will mean higher real interest rates in the United States. The prospect of juicier returns at home will reduce the money that has been flooding Asia in search of yield. Interest rates in the region will harden as well. That will be a blow for Asian companies and governments that, after adjusting for inflation, have enjoyed negative borrowing costs in six of the past 10 years.

With savers effectively paying borrowers, the pace of investment in Asia’s factories, machines, stores, roads and power plants has surged fivefold over that period. The region’s 10 largest economies last year spent a combined $5.5 trillion on physical capital: it has taken the private sector in the United States three years to invest the same amount. In what could become an additional source of vulnerability, the capital boom has been largely financed by borrowing: as a proportion of GDP, credit in southeast Asia last year rose to its highest level since the 1997 Asian financial crisis.

That boom is already beginning to slow. Aggregate investment grew 8 percent last year, its slowest rate in a dozen years. Excluding China, which accounted for 72 percent of Asia’s total investment last year, the rest of the region witnessed a small decline in capital spending.

Higher real interest rates are largely to blame. Measured as the difference between 10-year bond yields and producer-price inflation, Asian real interest rates rose to 2.2 percent in 2012, from minus 1.5 percent in 2011. The cost of capital for Asian companies spiked because the prices at which they sell their goods – a more relevant measure of inflation than retail prices – began to fall. This occurred as U.S. consumption, on which Asian producers’ pricing power crucially depends, faltered. Although real rates are still a fifth of the double-digit levels seen in the aftermath of the 2008 financial crisis, the increase is nonetheless alarming.

On the face of it, Asia should be able to cope with the withdrawal of liquidity. After all, with the exception of India and Indonesia, the region’s economies have sufficient savings to finance investment. However, local policy makers have limited scope to respond to rising real interest rates. If they try to hold local rates down, the risk is that money will leave home to chase better returns overseas.

To prevent capital outflows, Asia’s central banks may err on the side of caution and keep interest rates higher than they should be. That will be akin to throwing more sand into the Asian investment wheel until it begins to creak and groan, resulting in higher bad loans and a reduced willingness on the part of the banks to finance new projects.

Not all countries will be equally affected. China’s closed capital account makes it far less vulnerable to a withdrawal of overseas cash. Its investment slowdown is down to the government’s desire to shift the economy towards greater consumption.

The rest of Asia, though, will rue costlier global money. Despite the strong growth of recent years, there’s no particular evidence that the investment is wasteful. In South Korea, Taiwan and Singapore the ratio of investment to GDP last year was lower than in 2000, while in Hong Kong and Malaysia it was virtually unchanged. India invested 3.5 percentage points of GDP less last year than at the peak of its boom in 2008. And although investment rates in Indonesia and Thailand have seen dramatic gains, these countries still have giant infrastructure requirements. Ditto for the Philippines, where the capital expenditure cycle was just getting started.

Outside China, every $1 devoted to capital spending in Asia last year produced about $4 of economic output. The Fed’s tightening could take a toll not just on local growth, but also on tepid world demand. At some point, Asia’s investment lament could become the dirge of the global economy.