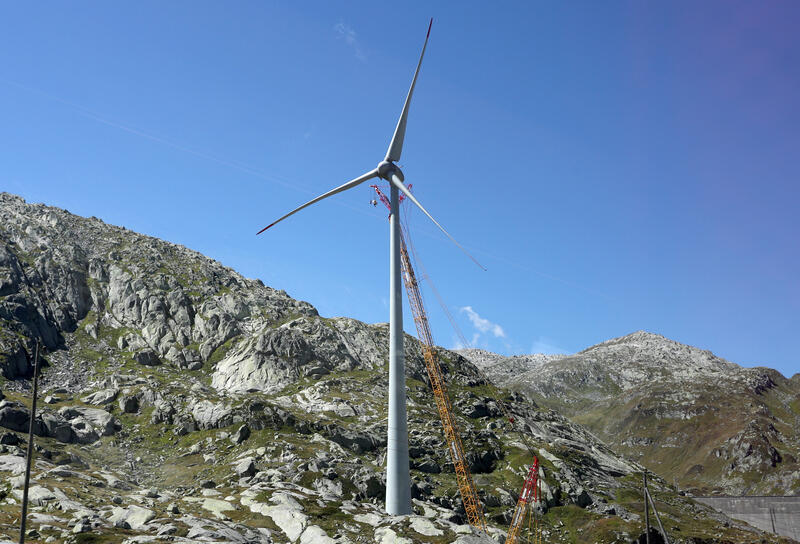 Concrete is the most widely used human-made material on earth. It is essential to the bridges, roads, schools, homes and hospitals we rely on today, and will continue to be required in the future to support our modernising and urbanising planet.

Despite its importance, concrete also comes with a challenge that the world will need to address over coming decades. In 2019, the world produced 4.1 billion tonnes of cement, the glue that binds the ingredients of concrete together, according to the U.S. Geological Survey. That is enough to give half a tonne to every person alive. In making cement, carbon dioxide is also produced. The cement industry currently accounts for about 7% of global CO2 emissions, per the International Energy Agency.

Shifting to clean and renewable energy requires more cement and concrete, not less. The average wind turbine requires dozens of truckloads of concrete for its foundation, and worldwide thousands of medium and large hydropower dams are currently planned or under construction, which will require hundreds of millions of cubic meters of concrete.

More concrete will require more cement and projections by the IEA indicate that by 2050, global demand for cement could reach 5 billion tonnes. This likely increase in demand over the next three decades underscores an increased urgency in finding ways to reduce the industry’s emissions. The cement and concrete industry is taking the initiative to become cleaner and more efficient, but needs other stakeholders on board too.

In September 2020, 40 of the leading cement and concrete companies represented by the Global Cement and Concrete Association signed up to a global climate ambition to drive down the carbon footprint of their operations and products, aspiring to provide carbon-neutral concrete by 2050. Achieving this ambition represents a challenging transition for companies with large-scale operations around the world. But the industry’s size also offers the chance to make substantial changes that will result in globally significant CO2 reductions.

The cement industry’s emissions come primarily from the fuel needed to heat limestone rock to very high temperatures and from the release of carbon dioxide stored within the limestone. Over the past three decades, the industry has reduced its emissions proportionally by nearly a fifth, predominantly from fuel side measures, according to independently verified industry data. The reductions represent the efforts of thousands of producers in dozens of countries. The carbon intensity of energy use in other sectors, such as transportation, has fallen only slightly over the same period, by U.S. Energy Information Administration figures.

Further reductions will mean reducing fossil-fuel use at every point in supply and production chains, and repurposing municipal waste as a smart and greener alternative. The industry is making progress on this important energy transition which, at the scale of the sector, is substantial.

In China, where most cement is manufactured, researchers estimated in 2016 that new carbon capture technology could reduce the country’s CO2 emissions from cement production by up to 57% by 2030. The rollout has momentum. Live pilots, projects and announcements are picking up pace and can also be seen in North America, India and Europe. This technology works, and the industry’s next goal is to scale up, working with stakeholders such as governments and the investment community to help transform the industry worldwide.

Last year the industry launched Innovandi, a cement and concrete research network, to accelerate global collaboration on innovation, an important step in taking action on climate change. This global endeavor includes 30 companies from across the cement and concrete industry and supply chain – manufacturers, admixture specialists, and equipment and technology suppliers – along with 40 renowned scientific institutions.

Not all changes need to cost money, and some can save it, such as reducing the quantities of raw materials used by reprocessing and recycling material. This means viewing concrete and cement not only as products to be produced, but as crucial components in a circular economy.

Some of the longer-term solutions are more easily implemented than others. The adoption of policies that encourage the circular economy, particularly recycling of construction materials, is politically not contentious and would be welcomed by the industry. Ultimately, some carbon dioxide will need to be captured, re-used if possible, or stored as a last resort.

Achieving carbon neutrality and long-lasting sustainable development will require the active participation of all sectors, especially large ones like the cement and concrete industry, that touch so many parts of life.

The industry’s efforts need support from policymakers and governments. This could, for example, take the form of collaboration and co-investment in relevant technologies, creating incentives for recycling, and identifying mutually beneficial opportunities such as using cement kilns to burn municipal waste. We also need input and backing from scientific researchers, and from others including investors, financial institutions, and the end users of cement and concrete.

Working together is the most effective way to build back better, stronger, and cleaner than before.

Dinah McLeod is chief executive of the Global Cement and Concrete Association.

The construction site of a new windmill is seen on the Saint Gotthard mountain pass, Switzerland September 3, 2020. On the central pass, at about 2,130 metres above sea level, Azienda Elettrica Ticinese (AET) builds a wind power station of five 80 metre-high windmills which will start in November to produce some 20 GWh of electricity per year, which is enough to supply 5000 households.

Dinah McLeod is chief executive of the Global Cement and Concrete Association.