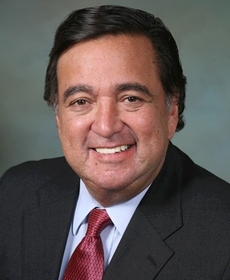 New Indian Prime Minister Narendra Modi’s reported visit to Washington this fall at President Barack Obama’s invitation represents the opening of a welcome new chapter in relations between the two countries. The United States needs to seize this opportunity for a “reset moment” with India, which shares our cherished democratic values and stands as a bulwark against extremism in one of the planet’s toughest neighborhoods.

In the years since I visited New Delhi with a Clinton administration delegation in 1998, a Cold War-bred suspicion between the United States and India began to gradually give way to a renewed sense of trust, culminating in a landmark civilian nuclear agreement and defense partnership. But the global financial crisis soon gave way to a vicious cycle of backbiting over trade policies viewed on both sides as overly restrictive and protectionist.

Restoring trust in the Indo-U.S. partnership will take time. But the Modi government is already taking positive first steps with proposals to encourage foreign investment and reduce regulatory red tape, reportedly to include allowing U.S. online merchants such as Amazon and eBay to sell their own products in India. The government in New Delhi should follow through and implement pro-investment policies on other perennial U.S.-India trade irritants such as pharmaceutical patents, film and music industry copyright protections, arbitrary business taxes and local sourcing requirements.

However, for the Modi government to do its part, it must have faith in America’s commitment to a mutually beneficial relationship. Obama’s invitation is one step, given that Modi was denied a U.S. visa in 2005 because of controversy over sectarian riots in Gujarat three years earlier in which more than 1,000 people, mostly Muslims, were killed shortly after Modi became the Indian state’s chief minister. But overall, that commitment is not what we are communicating to the Indian people right now.

Indeed, as the election results were being tallied, a top official with Modi’s Bharatiya Janata Party warned the U.S. embassy in New Delhi that temporary work visa provisions in a U.S. Senate immigration bill are “against Indo-U.S. friendship” and that “India-U.S. business interests will be the hardest hit.”

While I am a longtime supporter of comprehensive immigration reform and believe Congress must act to fix our broken system, the U.S. Senate bill clearly includes harmful provisions. The bill would charge significantly higher fees for H-1B visas to information technology services providers, many of whom are based in India or employ Indian workers, than to American technology firms with broader business lines that also compete in the IT services sector.

The bill would also completely bar these Indian firms from providing on-site IT support, disrupting the current services they provide to 480 of the Fortune 500 U.S. companies. One recent study found that the provisions in question would place the United States in violation of its commitments under the World Trade Organization’s General Agreement on Trade in Services, intended to guarantee the free movement of workers across borders.

A trade war could damage the bottom lines of many major U.S. corporations with large footprints in India, a rapidly growing market for exports and foreign direct investment. U.S. goods and services exports to India grew by nearly 450 percent between 2000 and 2012, while U.S. foreign direct investment in India has grown nearly 1,100 percent during that time. Total sales in India by U.S.-majority owned companies hit nearly $59 billion in 2011, a 19 percent increase over the prior year, according to the most recent Department of Commerce data available.

Some iconic U.S. household names are now major players in India. For example, IBM now employs nearly 165,000 people, making “Big Blue” India’s second-largest private sector employer. In fact, 10 of the 15 largest IT companies in India are U.S.-headquartered. That doesn’t factor in sectors ranging from defense to pharmaceuticals with vested interests in India that would suffer collateral damage in a trade war over high-tech worker visas.

By the same token, India has been an able and willing partner in growing our domestic economy. According to the Confederation of Indian Industry, India-based companies now employ over 80,000 American workers. Indian investment in the United States, miniscule a decade ago, topped $5 billion in 2012. The Indian government estimates that the offending provisions of the current Senate bill could shave up to 1.5 percent off India’s GDP.

U.S. immigration policy must not discriminate against those of Indian origin here on work visas, or against the IT services providers that are a point of national pride in India. The bill in the Senate in general provides the comprehensive immigration reform this country needs to be competitive globally. But we need to drop the visa provisions that are damaging Indo-U.S. relations at this critical time. We have the chance to set things right in the wake of India’s historic elections. Let’s not miss this chance.

Bill Richardson is co-chair of the American Competitiveness Alliance, a coalition “dedicated to a modern immigration policy that ensures America’s global competitiveness by attracting and keeping talent and know-how here in the United States.” He is a former Democratic governor of New Mexico, ambassador to the United Nations, energy secretary, and candidate for the Democratic presidential nomination in 2008.

Bill Richardson is co-chair of the American Competitiveness Alliance, a coalition “dedicated to a modern immigration policy that ensures America’s global competitiveness by attracting and keeping talent and know-how here in the United States.” He is a former Democratic governor of New Mexico, ambassador to the United Nations, energy secretary, and candidate for the Democratic presidential nomination in 2008.