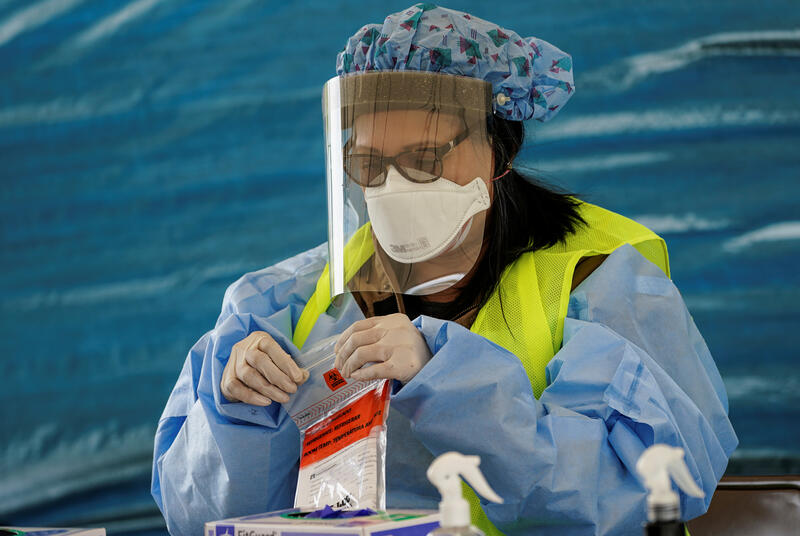 Week-long waits for results jar with soaring share prices of firms that test for the killer virus, like Quest Diagnostics and LabCorp. Detecting Covid-19 can be financially rewarding, yet supply remains woefully short. The debacle shows market forces need a firm guiding hand.

A worker processes a test at a drive-through site to collect samples for coronavirus disease (COVID-19) pandemic testing in Leesburg, Virginia, U.S., May 20, 2020.

Quest Diagnostics on July 23 reported a 6.4% decline in revenue for the second quarter, year-on-year, and admitted that its Covid-19 tests were taking “at least seven days” for non-priority patients. Quest has provided, by its own account, 20% of all testing for the coronavirus in the United States.

Quest and its main rival Laboratory Corporation of America are between them able to conduct around 295,000 tests per day, according to their websites. Just under 800,000 tests were conducted nationally on July 22, according to the Covid Tracking Project.

Demand for molecular testing conducted through labs has surged as Covid-19 has proliferated across the United States. That has exposed shortages of testing kits, equipment such as swabs and lab capacity, and left patients waiting for results.

Quest’s Chief Financial Officer Mark Guinan told analysts that the company had doubled its testing capabilities since mid-May and said there was “no hesitancy” in adding capacity. He added that Covid-19 testing brings “good margins” but did not disclose what those are.