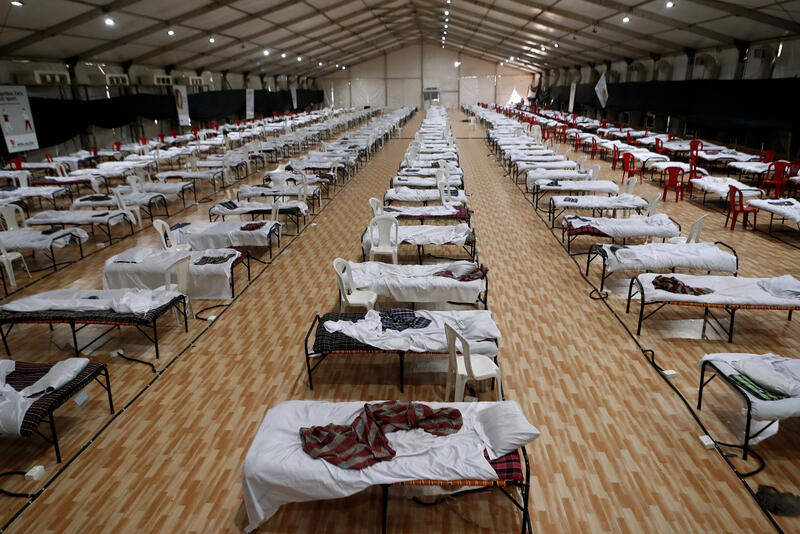 Money has some sobering limits. The rich of India’s financial capital are used to being able to purchase their way out of problems. Public transport is dire or non-existent – buy a car. Air amongst the most polluted in the world – pop down to a Croma store for an air purifier. Water piped into your bungalow or apartment is dirty – have a filtered variety delivered. Schools and universities mediocre – send the kids abroad to study.

Private healthcare has long been another one of those financially available alternatives to weak public infrastructure. For the higher taxpayers, it used to be more of a frustration than a barrier that public hospitals were overcrowded and underfunded, or that the government spent less than 2% of GDP annually on the sector and has one of the lowest ratios of beds per capita in the world.

Wealthy city-dwellers knew they could check themselves into state-of-the-art hospitals, like those run by Hinduja or Apollo Hospitals Enterprise, and pay a fraction of global prices for cancer treatment or to mend a leg broken while skiing in Kashmir. Indeed, the rapid demand for private healthcare in big cities helped fuel a five-way bidding war for hospital operator Fortis Healthcare just two years ago.

But the Covid-19 crisis, on top of layers of bureaucracy, has pushed Mumbai to the limit. Many luxury services were quickly restored: the rich are once more munching on hydroponic-grown curly kale and organic mangoes as private suppliers turned to Facebook-owned WhatsApp and other means to reach customers. But the hospital system, infinitely more critical and harder to scale at short notice, is on its knees and is now everyone’s problem.

Mumbai’s Brihanmumbai Municipal Corporation is rich but almost three months into the crisis, and despite official reassurances, well-heeled locals of the state find themselves running from hospital to hospital or forced to pull strings to get an admission even for non-Covid-19 conditions. The city, home to 20 million people, is living the emerging market healthcare nightmare with no clear end in sight.

And now the well-off are holding their breath. Lockdown restrictions are easing, even as Mumbai’s total case count exceeds that of worst-hit Chinese city Wuhan, and active cases in the wider state of Maharashtra remain at above 50,000.

The result is stark in one of the most unequal places on earth: wealthier folks are stepping up precautions, “locked down in their fossil homes” as local professor and poet Ashwani Kumar puts it, and those many more that cannot afford to stay at home are bustling back to work, cramming onto buses. It’s similar elsewhere in South Asia, where the economic hardship makes it hard to fault the decision to reopen.

The minority of Indians with private healthcare insurance have come to realise it is worthless without treatment. Access for the elite has been made harder after the Maharashtra government, led by Chief Minister Uddhav Thackeray, took over 80% of the bed capacity of private hospitals and capped prices they can charge for treatment after complaints of exorbitant bills.

Local authorities have been frantically adding capacity, building field hospitals, like the 1,000-plus-bed one in the Bandra Kurla Complex, Mumbai’s modern business district. But that has limited benefits with the pre-existing shortage of doctors and nurses. Out of fear and desperation wealthy Mumbaikars are pooling together to turn empty bungalows into mini-hospitals and, or dropping up to $600 on oxygen concentrators for their homes.

The health crisis is also throwing up a new face of hyper-local nationalism. A legal battle erupted after Delhi’s Chief Minister Arvind Kejriwal sealed the city’s borders and declared local hospitals should be reserved for residents with few exceptions. That’s contentious given the centre has better hospitals than most.

Many who can afford to leave Mumbai, including expatriate workers, have done so and others are still departing on special flights that bypass the ongoing international travel ban. And some foreign companies are making plans to evacuate the handful of foreign staff they have, especially now their own domestic health services are out of the worst of it.

Mumbaikars with second homes, easy-going relatives elsewhere in the country, or a disposable income are eyeing an exit too, and there is heightened interest in long leases for luxury villas with good Wi-Fi down in neighbouring Goa. But the walls are going up: Karnataka, for example, introduced extra stringent quarantine rules for arrivals turning up from hard-hit Maharashtra.

The ongoing mess overshadows some successes. City authorities appear to have managed to get on top of the spread of infection in Dharavi, widely regarded as Asia’s biggest slum, where social distancing is practically impossible. The virus’ recorded growth rate for the ward area to which it belongs is amongst the lowest in Mumbai, providing a glimmer of hope.

Many countries have decided to live with the virus, but few face such ongoing hospital horror. The struggle of India’s two top cities is the worst advert for Prime Minister Narendra Modi’s renewed “Make in India” push. Fresh from the trauma of their own lockdowns, foreign investors are unlikely to rush to fly through a city with broken healthcare to scout out manufacturing sites or technology centres. Neither Mumbai, nor Delhi are under the control of his ruling Bharatiya Janata Party but that’s a nuance few will appreciate.

The health crisis makes it painfully obvious that a more equitable future is a prerequisite for big Indian cities like Mumbai to thrive. For now, the rich are afraid and that message will travel loud and clear.

Beds are seen inside a recently constructed makeshift hospital and quarantine facility for patients diagnosed with the coronavirus disease (COVID-19) in Mumbai, India, June 11, 2020.