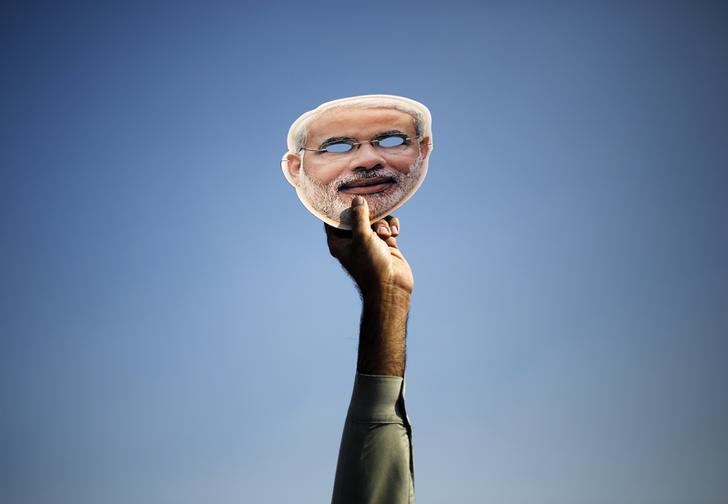 Narendra Modi could be India’s Shinzo Abe. If the recent state polls are any indicator of the electorate’s mood, the opposition politician will be prime minister of the world’s largest democracy by May next year. Just like his Japanese counterpart, Modi would oversee higher asset prices and revive growth, but struggle with structural reforms.

Financial markets would cheer a Modi victory just as loudly as they hailed the Japanese prime minister’s ride to power. Both Goldman Sachs and UBS expect India’s benchmark stock index to rise by 10 percent by the end of next year, a prediction that’s bound to be raised if Modi manages to cobble together a majority. Add a recovery in the battered rupee, and the gains for foreign investors could be quite lucrative.

The economy will also revive, as it has in Japan. But when the euphoria subsides, questions will arise about Modi’s resolve to usher in structural reforms. If the February 2015 budget disappoints, confidence will take a knock.

Modi will face a tougher job than Abe. The Japanese prime minister’s Liberal Democratic Party won a decisive mandate in December 2012, and took control of the upper house of parliament the following July. Unlike the all-too-entrenched LDP, Modi’s Bharatiya Janata Party will need the support of a number of coalition partners to wrest power from Sonia Gandhi’s Congress Party. These smaller regional parties prefer populism to reforms, and will expect Modi to make costly concessions.

Moreover, the Indian leader doesn’t have a well-articulated vision for the economy. That’s quite unlike Abe, who has made slaying deflation his mission. Modi has attacked the Congress for inhibiting growth and stoking inflation, but hasn’t spelt out just what he will fix and how. There is no “Modinomics”.

Electoral tactics may be part of the reason. Tackling India’s stagflation requires tighter government finances, but cutting spending will depress growth further. The obvious solution is to raise money by privatising state-owned businesses. But Modi can’t talk about that now for fear of upsetting unionized state-sector employees. The closest Modi has come to supporting the idea is saying: “I believe government has no business to do business.” This suggests he would restart the process of selling controlling stakes in state-owned enterprises, the BJP’s strategy before it lost the 2004 elections.

It’s doubtful Modi will invest much of his political capital in labour reforms, which Abe has also avoided. Reviving the stalled credit cycle will also prove a challenge for both countries. Japanese banks aren’t boosting domestic lending because credit demand is still weak. India’s banking system is dominated by poorly run, government-owned lenders, saddled with bad loans. Privatizing them is a non-starter because these lenders keep uncompetitive businesses – and their politically connected owners – afloat.

Modi’s best hope is to revive credit demand. That won’t be an insurmountable problem given just how strongly big businesses are rooting for him. As chief minister of the Gujarat state, Modi has built a reputation for cutting red tape and making it easier to do business. Those skills could help him revive private investment nationally. As prime minister, however, he will also need to make states agree to taxation reforms. A nationwide value-added tax that subsumes many bad local levies remains an elusive goal.

Indeed, Modi and Abe could help to solve each others’ problems. Japanese businesses, banks and pension funds want to invest, but Japanese society is too old to utilize many new investments. The solution might be to invest more in India, which has a young population and desperately needs infrastructure.

As in Japan, foreign affairs could upset the optimism. Investors will be spooked if they see any evidence that Modi is allowing nationalism to get the better of his reformist zeal. How Abe deals with China and South Korea will be crucial for stability in north Asia. Modi’s approach to China and Pakistan will determine the security landscape of the south.

In 2013, Abe raised hopes that decisive leadership can help tackle Japan’s deep-seated economic problems. Next year, Modi could do the same for India.

India’s opposition Bharatiya Janata Party (BJP) won assembly elections in Madhya Pradesh, Rajasthan, and Chhattisgarh and finished as the single-largest party in the National Capital Territory of Delhi, according to Reuters and other media reports on Dec. 8.

Elections for India’s national parliament are expected to take place as early as April 2014. Narendra Modi, the chief minister of the western Gujarat state, is the BJP’s prime ministerial candidate. The ruling Congress Party is led by Sonia Gandhi and her son Rahul Gandhi.

A Supporter of India's main opposition Bharatiya Janata Party (BJP) holds up a mask of Hindu nationalist Narendra Modi, prime ministerial candidate for BJP and Gujarat's chief minister, during a rally ahead of the state elections in New Delhi November 30, 2013.

India’s opposition Bharatiya Janata Party (BJP) won assembly elections in Madhya Pradesh, Rajasthan, and Chhattisgarh and finished as the single-largest party in the National Capital Territory of Delhi, according to Reuters and other media reports on Dec. 8.

Elections for India’s national parliament are expected to take place as early as April 2014. Narendra Modi, the chief minister of the western Gujarat state, is the BJP’s prime ministerial candidate. The ruling Congress Party is led by Sonia Gandhi and her son Rahul Gandhi.