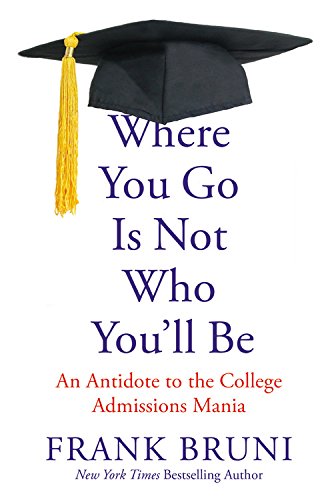 Frank Bruni should have a good month in May. The New York Times columnist’s new book is an ideal present for high school students who failed to secure acceptance to one of the country’s elite universities. Bruni offers a salve for the off-brand bound.

The title, “Where You Go Is Not Who You’ll Be,” is a neat summary of the book’s argument. Graduates with second-tier degrees are not doomed to professional mediocrity. That may sound obvious, but many of the country’s most privileged families suffer from what Bruni calls elite college mania, an obsessive pursuit of the Ivy League and its ilk accompanied by despair about one’s worth and prospects when applications are rejected.

The mania is spreading, and worsening. As the number of applications increase, so do the rejections. The schools look more exclusive and prestigious, while more young people feel left behind.

“Where You Go” aims to assuage the losers and to explain where the fixation on hyper-elite schools comes from. The reassurance that future success is not governed by college choice resonates, judging by the grateful letters to the editor and 774 comments garnered by an excerpt published in the author’s newspaper earlier this month.

The five chapters of anecdotes, which pad the essay into a book, will be quoted by guidance counselors and misquoted on Facebook. They don’t, however, add up to an argument.

True, the sentiments are spot-on. People’s worth shouldn’t be evaluated by their sheepskins. Higher education ought to be accessible and democratic, but isn’t. Bruni argues that at elite schools, the admissions process is particularly skewed. A 2011 study from Harvard found that applicants related to alumni at 30 highly competitive colleges had a 23.3 percent better chance of admission than their non-so-called-legacy peers.

Bruni argues persuasively that the belief that higher rates of selectivity increase the value of degrees has had a toxic effect on higher education as a whole. Public universities in particular have been hurt by faith in regular reports from the magazine U.S. News & World Report, which ranks schools by admissions rate, SAT scores and the ratio of their assets to the amount spent per student.

There is a big gap, though. Bruni does not really demonstrate that admission to an elite college is not worth striving for. There are, as he points out, many paths to the corner office, but the professional world is not clearer, fairer and more meritocratic than the world of higher education.

Take Bruni’s banner study. Only a third of Fortune 500 chief executives graduated from Ivy League schools. Those eight schools, however, only matriculate 0.2 percent of U.S. undergraduates. So a person is 165 times more likely to end up at the very top of the corporate world with the right degree than with the wrong one.

A more persuasive study comes from economists Alan Krueger and Stacy Dale. In 2011, they found that the lifetime earnings of the students who applied to elite schools, even if they were rejected or didn’t attend, were virtually the same as the students who actually attended.

Women and racial minorities who graduated from elite colleges, however, did do better than those who were rejected. Besides, the elitist frenzy has grown since the people in that study were college age. The future may be quite different from the past.

Bruni’s meritocratic belief that the marketplace will correct imbalances created by non-meritocratic undergraduate institutions seems helplessly naive. The connections alone give the Harvard and Yale crowd a big leg up. And even if college degrees were to lose some of their shine, there is always graduate school. The best option for an ambitious graduate of Podunk University is to try to get a place at a first-rate business or law school. A bachelor’s degree from a second-tier college won’t make that any easier.

Smart students will read “Where You Go” for the sentiment – and toss the faulty reasoning.

“Where You Go Is Not Who You’ll Be: An Antidote to the College Admissions Mania” by Frank Bruni was published by Grand Central Publishing, a division of the Hachette Group, on March 17.

“Where You Go Is Not Who You’ll Be: An Antidote to the College Admissions Mania” by Frank Bruni was published by Grand Central Publishing, a division of the Hachette Group, on March 17.