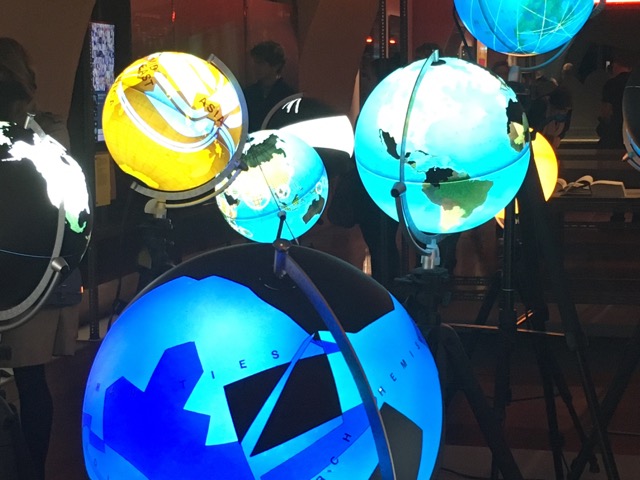 Electronic ones and zeros are invisible. But they matter. The amount of stored digital data first exceeded the information held in analogue form way back in 2002. Now well over 90 percent is digital. There’s value in all the data, but vulnerability too – in terms of both lost personal privacy and, as the world learned from former CIA employee Edward Snowden, mass surveillance.

“Big Bang Data”, an exhibition at Somerset House in London, attempts to make it all visible and tangible, in inventive ways. The first stop on the tour is a darkened room with almost movie-style displays of data to set the scene. And near the end there’s the latest iteration of a long-running project named “Black Shoals” in which what look like stars are projected onto a dark domed ceiling, like a planetarium.

The stars actually represent particular stocks traded on world markets, glowing brighter as they are traded and drifting slowly in response to historical correlations between them. Setting aside any financial or Big Data relevance, the result is absorbing visual art.

Closer to the practicalities of earth, one of many small screens displays a map from opencorporates.com showing the global network of related companies that comprise the likes of BP, Citigroup and Goldman Sachs – the latter among those with dense webs centered on tax havens like the Cayman Islands.

That installation showcases one useful way today’s data can be mined to understand and visualise things better. This thread runs through the whole exhibition, with different socially and economically valuable uses for information laid out – including a quick game in which visitors can set planning parameters for London’s future and see the potential results. Examples of data-visualisation techniques rub shoulders with artworks that explore information or use it as a raw material.

Even after Snowden’s revelations about widespread snooping by the U.S. National Security Agency and other entities, the most thought-provoking installations are the ones that highlight personal privacy – or the lack of it – and surveillance. In the show’s London Situation Room, Instagram pictures and key words from Twitter posts are projected on a giant map in real time. The potential value, even for understanding something as obvious as weather conditions, is easy to see, but the strangers’ posts popping up here and there also convey a clear message about the amount of information every smartphone user is revealing.

Short films and other exhibits pick up on the documents Snowden leaked. Others make simple but powerful points. One involves a data experiment available at iknowwhereyourcatlives.com. The creator’s idea was to trawl the web looking for pictures of cats with location data attached and display them on maps.

The internet-friendly feline subject matter doesn’t obscure the fact that the location of images of men, women and children can be just as easily pinned down with a bit of processing power. The Somerset House show notes that, once aware of the website, many thousands of cat owners have ratcheted up the privacy settings on photos of their furry companions, making them disappear from the site.

Underlying the data explosion, of course, is an increasingly connected world. One sign at “Big Bang Data” points out that the notion of data being in “the cloud” may be “one of the most deceptive metaphors ever coined”.

Huge warehouse-like buildings, ranks of massive servers, cables, transmitters and receivers are necessary for the internet to function – not to mention corporate overseers like Amazon, Cisco Systems, Facebook and the world’s telecommunications giants. That’s a topic covered in more detail in Andrew Blum’s intriguing book, “Tubes: A Journey to the Center of the Internet”. It’s given space at Somerset House, although the question of who manages the internet – and who should – is a critical one that’s not really tackled.

Overall, “Big Bang Data” is timely, original, engaging and – in parts – alarming, as it probably should be. Data geeks will love it; any smartphone user can learn from it; and most people responsible for quantities of other people’s data will get both a wake-up call and a new appreciation for the potential value of what they hold. Company boards charged with making the most of data as well as protecting it could do worse than plan a field trip.

The exhibition “Big Bang Data” runs at Somerset House in London until Feb. 28, 2016.

Part of "World Processor" by artist Ingo Guenther, pictured at the Big Bang Data exhibition at Somerset House in London on Dec. 28, 2015. The ongoing project consists of a series of globes visualizing world data. RICHARD BEALES

The exhibition “Big Bang Data” runs at Somerset House in London until Feb. 28, 2016.