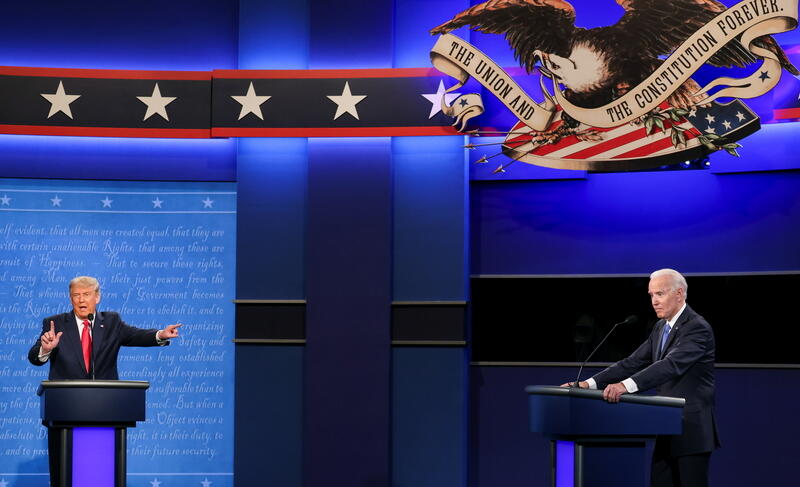 U.S. President Donald Trump said in Thursday’s presidential debate that the stock market would crash if his challenger Joe Biden is elected next week. History suggests otherwise. The commander in chief of the United States might matter for a few smallish sectors, but more powerful factors, like global upheaval, have far greater effect. So a portfolio overhaul is in order regardless of who wins.

Biden last week talked about transitioning to a renewable-energy economy. That ought to be good for solar and wind power businesses and the like. Would-be Vice President Kamala Harris talked in her debate with incumbent VP Mike Pence about decriminalising marijuana, potentially a plus for the fairly recent crop of mostly Canadian, U.S.-listed pot stocks. She also said the federal government would stop using private-sector prison operators.

Past presidential policies haven’t always worked in favour of those they are meant to help. Take coal, frequently promoted in Trump’s 2016 campaign. Coal-related stocks in the Russell 3000 Index have plunged more than 70% since Election Day that year, according to Refinitiv Datastream, and now have a combined market value under $2 billion. The president’s support didn’t, for example, prevent Murray Energy going bankrupt.

Another hot-button sector is guns. It turns out the remaining publicly traded firearms makers tend to do better when there’s an expectation of tighter restrictions on sales, for example when Democrats are in charge or headed that way, not when friendlier Republicans are in power.

But most of these sectors are too small for any but the most niche investors. The two traded gunmakers, Smith & Wesson and Sturm, Ruger, also have a combined market capitalisation of only around $2 billion. The two listed prison groups, CoreCivic and GEO, are worth even less altogether, and both stocks – although winners right after Trump’s election – have been sliding since 2017.

Datastream’s cannabis industry classification references just half a dozen companies worth a total of $17 billion, or just 0.05% of the $34 trillion of total U.S. equity value. Renewable energy is arguably the biggest opportunity in terms of market capitalisation. Yet although some large enterprises are pretty green, like $146 billion utility NextEra Energy, they aren’t pure plays. One grouping of seven stocks classified under narrower alternative energy headings is worth just over $60 billion, still relatively small.

And energy companies are moving ahead with a shift toward cleaner power because consumers, investors and ultimately economics demand it. The alternative-energy stocks are already on a tear this year, even if the trend might be intensified if Biden defeats Trump.

Such global currents matter far more than who happens to be president of the United States. Earth-shaking events like the pandemic also have far bigger impacts on markets of all kinds. No president could have given big technology companies the boost from working and shopping at home that Covid-19 has delivered, for instance. The response from the Federal Reserve, slashing interest rates and propping up all kinds of asset prices, overpowers any imaginable White House policy. Hefty fiscal stimulus, meanwhile, relies on Congress.

Another round of handouts will probably follow whichever candidate wins next Tuesday. If Democrats also control Congress, a Biden stimulus could be bigger – but he may also partially reverse Trump’s 2018 tax cuts. That’s a potential hit to all companies’ post-tax earnings, but how much that could offset the positive impact of stimulus is impossible to know.

More generally, going back to 1789, U.S. stock markets have typically done about equally well under Democratic presidents or Republican ones, according to an analysis by Fidelity – an average annualised return of just under 9%. That has been the end result after four years even though the first half of a term can differ from the second depending on the configuration of the presidency and House and Senate control. For example, when Democrats have had all three, stocks have typically gone up more slowly in the first two years and caught up later.

Rather than betting on individual stocks or sectors based on the presidential race, maybe the post-Covid economy calls for a rethink of the 60% stocks, 40% bonds portfolio, a traditional benchmark. One big reason for a review is that the ultra-low interest-rate environment since the financial crisis more than a decade ago has changed the relationship between how equity and debt instruments behave. With this year’s coronavirus-related stimulus now a global phenomenon, old-school concerns about balancing budgets and limiting government debt have also gone out of fashion.

A Breakingviews analysis in May suggested the standard portfolio allocation could be improved with more equities, less fixed income, some cash and a slice of gold, an inflation hedge at a time when runaway prices have also fallen off the list of policymaking concerns. That could be the smartest kind of 2020 election adjustment.