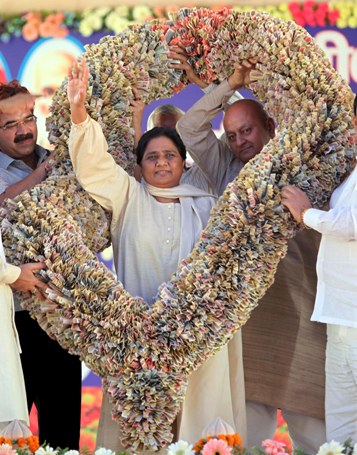 What’s the best way for India to slay corruption: punish the culprits or make government so transparent that it is hard for bribery to find places to latch onto in the first place? The answer is both.

Corruption finds its way into pretty much every nook and cranny of public life. There’s high-level corruption, such as the telecoms scam that cost the government an estimated $39 billion in revenue when mobile licences were awarded to companies too cheaply between 2007 and 2008. There’s the petty corruption, such as middlemen taking a cut as they distribute subsidised food to the poor. And there’s the corruption at the heart of the electoral system: candidates pay voters to attend their rallies and sometimes shower them with cash, often of unknown origin.

Over the past year, India has been transfixed by a campaign led by Anna Hazare to force the government to create an ombudsman which would prosecute corrupt politicians and bureaucrats. Hazare’s initial hunger strikes brought millions of sympathisers out on the streets and forced the government into a series of humiliating U-turns.

But “Team Anna” has lost some steam. When 74-year-old Hazare launched his third hunger strike just before the New Year, hardly anybody turned up – and he had to call it off prematurely because he was ill. Team Anna is now taking a pause for reflection, and the legislation creating such an ombudsman has yet to be instituted. One early conclusion is that it will have to find other tactics apart from hunger strikes.

Even if Team Anna fizzles, the broader anti-corruption movement has a life of its own. A more youthful, wealthy, tech-savvy and educated middle class is unsettling the balance of Indian politics. The media is hot on the trail of corruption. Parts of the business community – notably, Azim Premji, chairman of Wipro, the IT services giant, and Deepak Parekh, chairman of banking group HDFC – have campaigned against graft, arguing it is one of the greatest threats to India’s economy.

In the current Uttar Pradesh elections, the powerful incumbent Chief Minister, Mayawati, has just sacked around half her cabinet for corruption. When the opposition BJP which had been supporting the Anna campaign welcomed some of the sacked politicians into its fold, it faced a backlash. What would once have been seen as smart politics is now viewed as hypocrisy.

Some public servants have also taken steps to shine a spotlight on corruption. The Comptroller and Auditor General produced a series of critical reports including one on the telecoms scam. The chief justice has played a big role in pushing for a proper investigation of this case, free from political interference. And the former number two at the Securities and Exchange Board of India (SEBI), the financial watchdog, has alleged that the Finance Ministry exerted undue pressure on SEBI in support of businesses including Reliance Industries, run by multi-billionaire Mukesh Ambani.

There’s no cause for complacency. Even if the chief justice is doing a good job, the overall judiciary has stacks of cases that have been backing up for years. Meanwhile, nobody has acted on the SEBI whistleblower’s allegations. Indeed, the Finance Ministry removed SEBI’s boss last year, arguably undermining its independence.

India clearly needs a strong ombudsman. When this comes back on the agenda, probably in the next few months, there will be much wrangling over exactly what form the legislation will take. The main dispute will be over whether the Central Bureau of Investigation, which carries out probes, should report to the ombudsman or the government. Team Anna, unsurprisingly, wants the investigators to report to the ombudsman arguing that otherwise the government could interfere with probes into its own corrupt activities.

Let there be sunshine

A strong ombudsman is only part of the answer to India’s corruption problem. The other part is to make the whole system of government more transparent. A big step in this direction was taken with a Right to Information Act in 2005. Journalists and other campaigners have been successfully using this act in pursuing corruption investigations.

Another big step would be the use of electronic auctions to allocate state resources – such as land, minerals and radio spectrum – as advocated by Premji and Parekh. A similar approach could be taken with government procurement. The more things are done in the open, the less chance of bribes changing hands.

Meanwhile, an ambitious scheme to give Indians a biometrically-validated electronic identity could help combat low-level corruption. At present, about half the babies born in north India aren’t even registered. But once it’s clear who everybody is – and fingerprints and images of irises held in a central database aren’t simple to fake – it should be easier to make sure that the right goods and payments get to the right people with less leakage to corrupt middlemen.

The unique identity (UID) scheme could also be the basis for bringing bank accounts and mobile phones to the hundreds of millions of people who don’t have them. And as more people have access to electronic banking, it will then be easier to get rid of universal subsidies such as cheap diesel and replace them with targeted payments to those really in need.

Nearly 200 million Indians have so far registered for a UID. The scheme has got off to a cracking start, in part because the government brought in Nandan Nilekani, ex-chairman of Infosys, the IT services group, to run it rather than rely on the established civil service. Nilekani is used to the IT ecosystem – where application developers, financiers, business partners and other talent are pulled together behind a common enterprise.

But that hasn’t meant things have been plain sailing. The initiative risks becoming stalled in a turf war with the Home Ministry, which has a rival identity card scheme. The matter is due to be fought out in cabinet next month.

If UID initiative can survive, it won’t just provide a way of cutting low-level corruption. It could also be a model for sorting out other massive problems in the public sector. The gummed-up judiciary would be a good place to start. Why not assign cases unique identity numbers, pop them into a central database and then track how rapidly they are moving through the system?

If Team Anna gets its mojo back, its priority will be to fight for a strong ombudsman. But, after that, it could do a lot worse than turn its attention to the transparency side of the anti-corruption agenda.

Part 3: Is demography really a blessing?