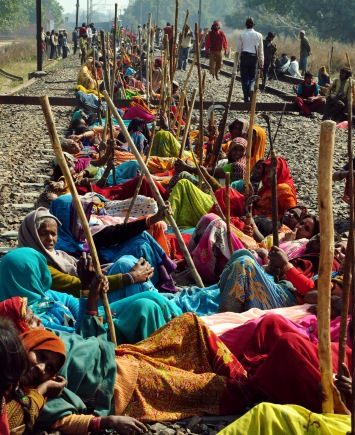 It’s common in India to say that, even if the country suffers from short-term political paralysis, the long-term growth prospects are great. But is that really so?

The bull case relies on two factors: demography and catch-up. Look at demography first. India’s population, currently 1.2 billion, will reach 1.7 billion in 2050. China’s, by contrast, will stay stuck at 1.3 billion. What’s more, China’s population is greying whereas India’s working-age population is still swelling. By 2040 the average age in China will be 46 whereas in India it will be 34. This means that workers and consumers will be growing faster in India than on the other side of the Himalayas — and that should, all other things being equal, be good for growth.

Now look at catch-up. India’s GDP per capita in 2011 was $1,527 – compared to $5,184 in China and $48,147 in America, according to the International Monetary Fund. If there is adequate investment in both physical and human capital (such as education and health care), there’s no reason why India shouldn’t close the gap on China just as the Middle Kingdom is catching up with America.

So much for the theory. In practice, to achieve such potential, India will need to navigate three bottlenecks. The first of these is actually getting all that investment into the system. Investment has risen from 25 percent of GDP in 2000 to 35 percent last year. The current five-year plan, which runs until this March, will virtually hit its target of investing $500 billion in infrastructure. The next plan calls for a doubling to $1 trillion, much in the form of partnerships between the public and private sectors. If that happens, it will be great. But large new investment projects have ground to a halt as a response to the political stasis and the loss of business confidence (See part 1 of this series). Delhi’s latest effort to kick start investment – forcing cash-rich state-owned firms such a Coal India to invest up to $35 billion in infrastructure this year –  may help. But the real challenge is to unlock commercially-motivated private investment.

This brings one to the second bottleneck: politics. The fact that India is a democracy means it is less likely to face a disruptive revolutionary upheaval than China. But India’s democracy is a raucous one. In the 65 years since independence from Britain, power has become increasingly fragmented. Initially, the Congress Party – which led the independence struggle – pretty much dominated political life. There are now multiple opposition parties both at a national and state level.

This is not surprising in such a vast country with 28 states and 7 union territories, 22 official languages, 6 major religions, 645 scheduled tribes and a multiplicity of castes – all of which offer the potential breeding ground for political parties. Coalition government is here to stay. Regional parties may be happy to join national coalitions, but they make difficult bedfellows. Even in times of crisis, their main interest is in seeking spoils for their states. They are prepared to hold the national interest to ransom to get their way.

One silver lining is better governance in some states. Nitesh Kumar in Bihar and Narendra Modi in Gujurat are cases in point. In Bihar, Kumar is credited with reversing the fortunes of a failed state of 100 million people by improving law and order and investing in infrastructure, so boosting its growth rate to 14 percent in 2011. Modi, meanwhile, has fought against corruption, improved efficiency and sucked in investment with the result that Gujarat, always a relatively strong state, now enjoys a per capita income 37 percent above the national average.

Such successes point to a possible solution to India’s chronic political paralysis: decentralise more power from the centre. It is easier to reach sensible conclusions on what to do in relatively homogenous units with average populations of 40 million than in one sprawling polity of 1.2 billion going on 1.7 billion.

The environmental impact of that growing population is the final bottleneck. India is going to struggle to get enough land, water and power to satisfy the increasing consumption of an expanding population.

India already imports more than three quarters of its oil requirements. And though the country has the world’s fourth largest coal reserves, environmental restrictions mean production is struggling to keep up with demand from coal-hungry power stations. A year ago the then environment minister declared a third of coal reserves “no-go” areas. Although the policy has since been reversed, regulatory clearances for new mining projects remain hard to come by.

There are two main concerns: reserves are predominantly located in densely-forested areas; and these areas are often inhabited by poor tribal communities. A new mining bill, which is yet to be passed, proposes firms share 26 percent of their earnings with the tribal communities they displace. That may help persuade the local people that development is in their interests but it won’t resolve the question of deforestation.

Farmers protest against the takeover of their land for two proposed power plants, Karchana

More generally, India is going to have to strike a balance between development and ecological sustainability. As the prices of resources rise and more of the costs of environmental destruction are born by business, the country’s potential growth rate is bound to suffer. Sure, the environmental challenge may at the margin spur innovations that allow Indians to live richer lives without consuming lots more stuff. But there is only so much that can be done when 1.7 billion people are crowded on 2.4 percent of the planet’s land. The population explosion isn’t an unadulterated blessing.

India’s long-term prospects are linked to its current performance. Most of today’s grand projections come off the back of some impressive rates of growth over the past decade. The problems of today – a decline in investment, a bulging fiscal deficit, rampant corruption and environmental roadblocks – are also the key challenges of the future. And a youthful population is only an asset if it can be employed productively. The economic solutions have been written down many times before but decisive action is in short supply. A change in politics driven by more state-led decision making could be the key that unlocks a sustainable high-growth trajectory. Otherwise, the India Shining story will continue to unravel.

Farmers protest against the takeover of their land for two proposed power plants, Karchana