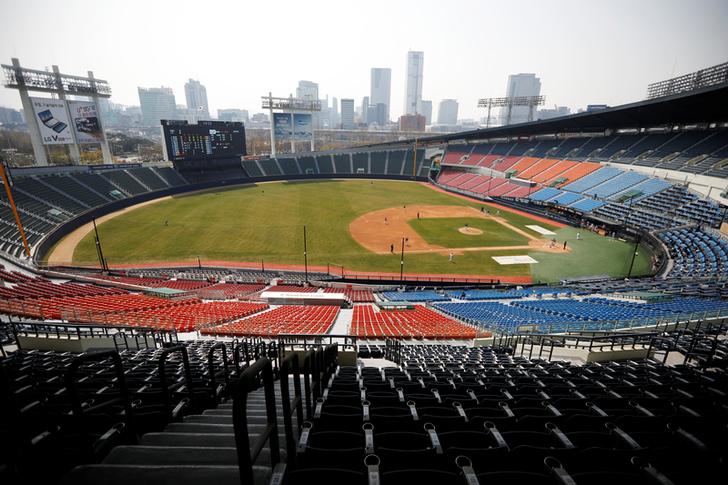 LG Twins team players play their intra-team game to be broadcasted online for their fans at a stadium emptied due to the spread of the coronavirus disease (COVID-19) in Seoul, South Korea, April 2, 2020.

National Hockey League players can expect daily Covid-19 testing if a proposed 24-team play off competition is able to go forward this year, Reuters reported league officials saying on May 26.

The NHL, on hold since March due to the global coronavirus outbreak, has outlined a roadmap for a return to competition, with plans to hold games in two hub cities without fans but stopped short of suggesting a potential start date.

NHL Deputy Commissioner Bill Daly outlined the league's "rigorous and comprehensive" testing protocol, which would include nightly Covid-19 testing once the competition gets underway.

"Those results are obtained before they would leave their hotel rooms the next morning, so we'll know if we have a positive test and whether the player has to self-quarantine himself as a result of that positive test," he said.

Separately, the National Basketball Association is in talks with Walt Disney about restarting its suspended season at Disney World in Florida in late July, Reuters reported on May 23.

The potential plan would see the league hold games at a single site, the ESPN Wide World of Sports Complex, a sprawling athletic complex that would allow the league to limit outside exposure.